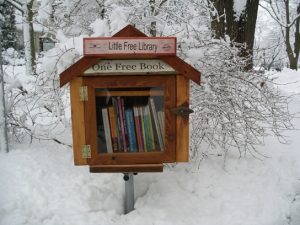 The Roberta Fraga shared now a link to the photo of a vest surrounded by snow .

It was then that I discovered the Little Free Library project .

And so, I also want to see small libraries like this one in front of houses here in Curitiba, with books available for anyone who wants to borrow them.

Of course, in less than ten minutes of saying I wanted to do this, I’ve already heard two or three times that it wouldn’t work in Brazil.

But I must have told you here that this phrase was one of the main motivators for the creation of Bibliopote .

Bibliopote is a library that works at the Panificadora Pote de Mel, where you can borrow books without asking anyone, with no card and no return deadline. In the same way I want the new free mini-libraries to work.

For that I need a cabinetmaker willing to create and build at least 10 of these mini-libraries. They don’t even have to be like the ones on the website. They can be simpler, as long as they are able to withstand the weather exposure and protect the books.

If I don’t find anyone willing to donate their work, I plan to pay for them.

But I must say that there are many advantages

In the case of donation, the mini-library project will bear the name of the carpenter or carpenter.

Since it was created in 2008, the Pote de Mel Library has been the subject of numerous reports on TV, in print newspapers and magazines.

This year, I participated in TEDx Curitiba , an independent event linked to TED , as a speaker – along with personalities like Jaime Lerner and Marcelo Rosenbaum – talking about Bibliopote.

In other words: participating in this idea can publicize and ennoble your brand and your work.

For this, there is no type of bureaucracy to be fulfilled: just make the mini-libraries.

Once I have the mini-libraries, good books are very easy to get.

It remains to find houses in front of which these mini-libraries will stand. They need to be homes for people in Curitiba who believe in the circulation power of books and who, above all, are detached, so that they don’t care about those books that don’t come back. This happens with many of the books, but it is foreseen and should not affect the idea: that it is not focused on collections, but on circulation.

All you have to do is receive the donations that are sure to arrive, ensure that the box is never empty, and stamp all new donations with instructions similar to these .