My youthful interest in history and ancient literature brought up a striking question: “How did all this information reach us, if Gutenberg invented the printing press in 1439?”

Thousands of years ago, before the book was in the format we know today, it was handwritten . It was copied manually in the most diverse materials: leather, skin, parchment, papyrus until we got to paper. The copyist was a foreman who copied the text by hand onto these surfaces. A very dignified and necessary profession in times when there was no technology.

It all started with the need to record the acts, memories and accounts of kings, princes and lords. In scroll form, manuscripts for millennia have held the cultural memory of mankind; the few ideologues, philosophers, jurists, poets, historians and prophets that the time allowed, because reading was a very rare skill, drank from its sources. Few knew how to read, or had the opportunity and conditions to dedicate themselves to it.

Libraries didn’t look like they do today. They looked more like paper dumps, which anyone rarely touched. They were restricted places, since at that time there was already the concept of preserving cultural heritage and leaving testimonies to posterity. The high cost of the material made manuscripts very rare and required environments with low temperatures and certain security. They were often kept in cold caves, in amphorae that helped with preservation. Kings, sages and religious took care of this true treasure with great jealousy; some of the few wonderful works that have come down to us existed only in a single copy, which generated the greed of the powerful or the fury of the looters. Those who arrived felt entitled to destroy everything in order to erase traces of the civilization that once existed there.

Over time, and in a world submerged in permanent wars, books should be stored in guarded places, such as palaces, barracks, convents and libraries. The most famous was Alexandria, which for over 500 years had a collection of nearly a million papyrus scrolls, with the most important works on medicine, languages, literature, mathematics, physics and astronomy; in it gathered the curious and wise of the time; in 391 AD it was totally destroyed, and with it disappeared works of which we never knew again.

It was in these paper deposits, called libraries, that sages gathered to discuss and learn. In these meetings, they studied all the material gathered and made a general overview of the work; an example of this was the famous gathering of 72 Jewish sages who translated the sacred Jewish scriptures into Greek, resulting in the “Septuagint”.

Some individuals wrote their own work and guarded it jealously; after his death the work was entrusted to some powerful who kept it in order and defended it from attack; Aristotle, for example, had his writings kept by his disciples for 200 years, until Sulla took the little that was left to Rome, and had copies made in 70 AD It is estimated that thanks to this act, 10% of the philosopher’s work arrived. even U.S.

It was already evident that organized knowledge generated culture and this was necessary for the well-being of people and countries. As it was very difficult to have more than one copy of a work, the powerful asked travelers to bring new works to enrich their collections and take advantage of all this information. Thus, the figure of the copyist was born, who, in the shadow of sages, kings and conventuals, learned the difficult art of reading, to later learn the even more difficult techniques of writing. Many of them were civil servants, slaves, friars, novices, monks. 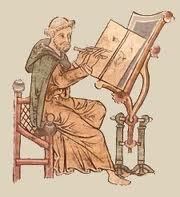 Cassidorus (490-581 AD) created a monastery in Calabria, installed a “scriptoria” and decided to copy the great Latin works there. In the book “The Institutions”, he praises the copyists: “By rereading the scriptures, they enrich their intelligence , multiply the precepts of the Lord, through their transcriptions. Happy application, study worthy of praise: preaching by the work of your hands, opening and giving your fingers to tongues, silently bringing eternal life to men, fighting the devil’s suggestions with pen and ink…” When he died, his collection was transferred to Lateran, seat of the bishopric of Rome, and hence many of his “copied” books spread across Europe.

It was also in the “scriptoria” that writing evolved. In the 7th century, Charlemagne gave directives to standardize writing in a small, legible and regular size, which gave rise to the name of the script “Carolina”, which was chosen by the first printers of the fifteenth century, and we still find it in writing today.
The copying of literary, religious or profane works was very important, since the artists – or craftsmen – of the monastery who practiced calligraphy could sell the fruit of their work, giving the monastery resources to support the brothers and for charity with the poor and guests. The transcription of the manuscripts could also assume a character of “penance”, fulfilling an ascetic objective, since it imposed a real “torment” on the copyist, as stated by a ninth-century monk, Arduino de Saint-Wandrille: “Who is unaware of the work of writing, you can never know the torment of work”.

In order to improve and enrich literary works, “illuminations” were created, which are magnificent handmade illustrations. The first works of this kind are from Ireland and date from the 7th century. The artist painted exaggerating the whimsy and details, using bold colors and ornaments in gold and silver, and these were used to illustrate the covers, chapters and even paragraphs. Wonderful works of art came to us through books that contained them. This is one of the first art forms present in the books, as the prints were used as an independent work of art. 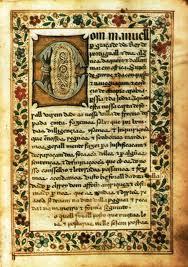 Gutemberg’s ingenious invention was turning off the lights of these extraordinary artists, which did not take away the habit of writing and copying; until the middle of the 20th century, the idea that a work to be understood should be copied by hand in its entirety was widespread. We must agree that this is an absolute pedagogical truth, but today with the need for mass production, and inclusion and digital media, it has lost its usefulness. In 1973 I visited a used bookstore in Milan, where there was a great and wonderful offer of manuscripts, illuminations and copied books, until today offered for sale in several used bookshops , at astronomical prices.